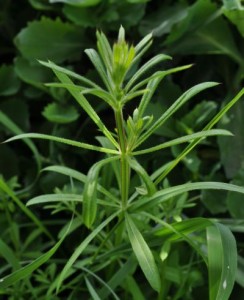 Cleavers has many different names, two that I grew up with were sticky-willy and goose grass. As children we had great fun with goose grass as it is very sticky and we would pick large clumps of it and stick it to the backs of our friends. Of course, the stickiness has a purpose, it is a way to disperse seeds via birds and animals. My parents always waged a war against it and it was one of those weeds that went is the bin rather than the compost bin.

Apparently, cleavers is a dynamic accumulator – that is, a plant that actively concentrates certain elements or minerals. In the case of cleavers, it accumulates calcium (Ca) and sodium (Na) though it is also rich in copper (Cu), iodine (I) and silicon (Si).