We have been growing gooseberries for many years now. As a child they were not my most favourite fruit but since we have grown our own I have come to like them much more. i know some people are put off them by their flavour, they aren’t always the sweetest of fruit, and the majority of plants are very spiny.

Over the last few years I have changed the way that we grow them. I used to let them grow as a bush but that meant getting cut to pieces when picking them. We have also been plagued by sawfly larvae for the last few years, one year practically all the leaves were stripped off the plant whilst we were away. To make life easier for myself in picking and sawfly larvae management I have been growing the gooseberries as cordons. The idea here is to grow branches vertically and apart from each other like the fingers on a hand pointing upwards. By trimming all side shoots to a few leaves you get green fingers pointing upwards with lots of space between allowing you to pick gooseberries or sawfly off the plant without scratching.This also allows more daylight into the plant. 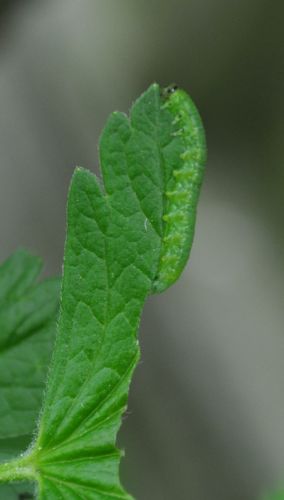 Sawfly over-winter as a cocoon in the soil with the adults emerging about April.They lay torpedo-shaped eggs along the main veins on the undersides of leaves usually low in the middle of the bush. These hatch and the larvae remain in the centre of the bush feeding for 1-2 weeks until about half grown, they then move through the rest of the bush stripping the leaves. After about 3 weeks of feeding the larvae drop to the soil and form cocoons. There can be 3-4 generations in a year between late April and September.

The sawfly in this picture has stripped half the leaf. I understand that this is a female, the males have more black marks on them. I have observed that males can often be found in groups on a leaf whereas the females tend to be on their own.

In order to reduce sawfly damage we need to interrupt the life cycle in some way. I want to use organic methods of control and not spray the plants with anything that might affect the plant or other beneficial insects. Here are some of the things that I have been investigating: