If food waste was a country it’s carbon footprint would be the third largest behind the USA and China. Therefore it is very important that we don’t waste food. There is always some waste such as vegetable peelings, apple cores, banana skins,etc and the way this is dealt with in many cities is to transport it away to compost, landfill or energy generation.

I believe it so much better to deal with your waste on-site if you can and make it part of a circular economy in your own back garden and so I compost as much of the waste that we generate as I can as well as receiving food waste from some of our neighbours through the ShareWaste scheme.

I currently have several compost systems on the go which I must write about sometime. There is: 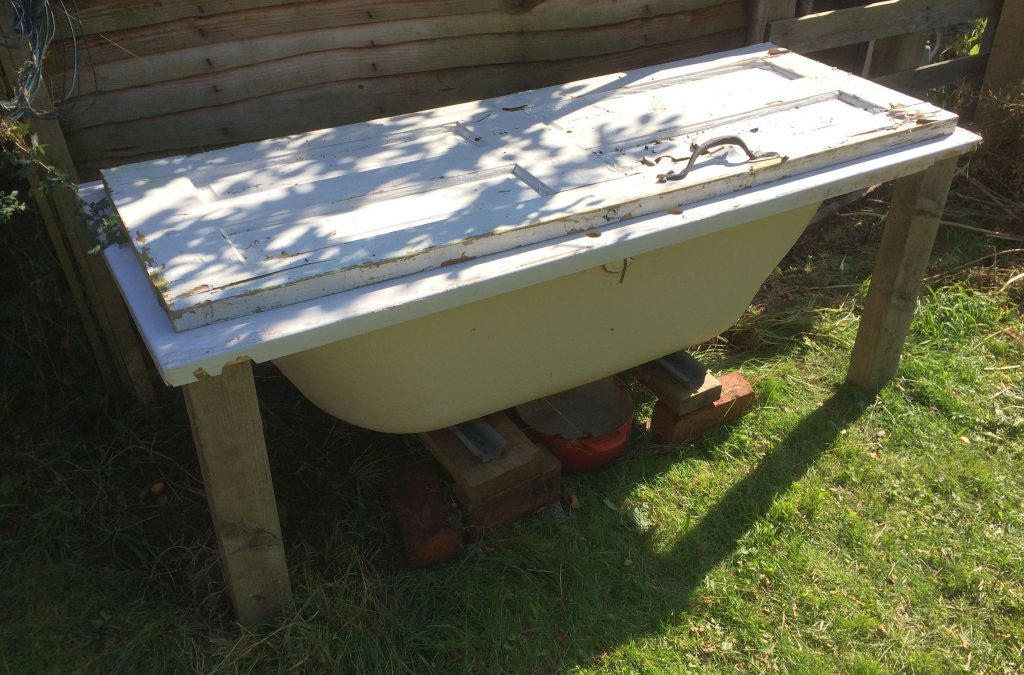 The bath was recovered from a local skip and it is one where the taps and plug hole are at the middle rather than at the end. I have raised it off the ground with some bricks and timber plus fastened some supports at the front corners to make it more stable. An old, damaged metal casserole dish fits under the plughole to collect the “worm pee” and an old door recovered from another skip has been sawn down to size to fit on the top to keep rats, the dog, cat, birds and sunlight out and to keep the interior of the worm bath cosy for the worms. I have added wet cardboard waste, some older compost with worms in and some partly composted waste in it to provide the initial bedding for the worms and will shortly start adding small amounts of food waste mixed with chicken bedding (mostly wood chip) to see how the worms get on. I am fully expecting to have to order some “proper” composting worms in the near future but I want to see what the small red worms that have appeared in our compost are like first. Hopefully we will shortly be producing compost and liquid gold worm pee tea!